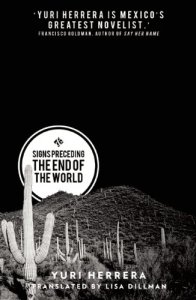 If I could invite just one author, one living author, to this year’s Northern Territory Writers Festival in Alice Springs (18-21 May) it would be Yuri Herrera. His second short novel, Signs preceding the end of the world, is an outstanding multi-layered book whose themes speak directly to the festival theme: Iwerre Atherre – Crossings. Physical, emotional, temporal, spiritual, mythical, metaphorical, metaphysical.

The evocatively titled story is a heroine’s journey into a new world, an underworld, undertaken by Makina, an archetypal messenger. Crossing frontiers of geography, culture and language, she is sent by her mother to deliver a letter to her older brother who crossed over a year or so ago. On first reading, I was not aware that the chapter titles and skeletal plot were based on the Aztec myth of Quetzalcoatl’s journey north to and into the nine underworlds of Mictlan. Familiarity with the myth is not necessary, tho the use of the mythic structure produces a distinct other-worldliness and timelessness. Sparely written, the story leaps from scene to scene, insistently from one test to another trial.

The setting of the novel is not specified (giving it the sense of being ‘all places’, all frontiers) tho it is based on the divide between Mexico and USA. The racist and xenophobic acts of so-called patriots in the story have as much relevance to Australians and the manner in which we consider and treat our ‘boat people’ and immigrants from other cultures.

One of the delights of the book is the playful and inventive use of language and imagery, which Herrera acknowledges is a much dependent upon the excellent translation from the Spanish by Lisa Dillman (who also translated Herrera’s most recent novel, The transmigration of bodies), the translation being effectively ‘co-authored’.

Makina is herself a translator. As the switchboard operator for her village with the only phone for miles around, she is the intermediary between worlds and languages. She can speak all three languages – latino, anglo, and the native tongue – ‘and knew how to keep quiet in all three, too’. Language is used to show a world in transition, the old ways not yet being dead and the new ways not yet born. Reinventing, reinvigorating, renewing.

The most startling word in the book is the odd verb ‘verse’. Herrera has resurrected this transitional verb from a pre-Spanish language, a verb used in the final verse of poetry. Meaning ‘’to leave’, in anglo it connects with other words: traverse, converse, and the universe.

The novel is a reminder that, yes, you can go, you can cross, but once you have crossed over, tho you can return, you will not be the same. Crossing into uncertainty and chaos, out of which is new creative expression.

What else have I been reading?