For Christmas I read Geordie Williamson’s The burning library and a sea-side sinkhole opened up in my reading list. A sinkhole of neglect for many of Australia’s now-unknown literary gems. Yes, I had read Patrick White’s marvellous novels Voss, Tree of Man and The vivisector; Randolph Stow’s great Tourmaline; as well as works by Thomas Keneally, Gerald Murnane and Amy Witting; but most of the authors considered to be critically renowned but commonly unknown were, I must admit, unknown to me. M Barnard Eldershaw, Christina Stead, Dal Stivens, Jessica Anderson, Elizabeth Harrower, Olga Masters, David Ireland. I vowed to rectify this atrocious state of knowledge. In other years I dedicated my endeavours to Russian classics; 2016 would be the year for OzLit classics.

And now, thanks to Text Publishing, many of these classic books are once again available on booksellers shelves (and not merely languishing on musty shelves of second-hand bookstores).

The local inhabitants (and regular pub drinkers) of a sleepy English seaside town are terrorised by a mass murderer. Inspired by the real Nedlands Monster and influenced by the Yorkshire Ripper, Stow creates an alternative who-dunnit. The killer is never found, but rumour casts a suspicious glare upon several people.

I chose this (final) novel of Stow’s because it is one of the few of his books that I had not already read. Stow is one of the great (unknown) Australian novelists that demands to be read.

If you are new to Stow, I recommend:
Tourmaline
The Merry-Go-Round in the Sea
Visitants
The Girl Green as Elderflower
To the Islands (Miles Franklin Award winner 1958) 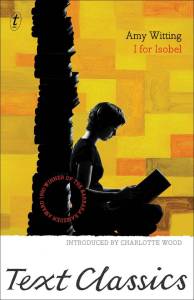 What a wilful delight is Isobel Callaghan whose (only?) fault is to repeatedly break the 11th Commandment: Thou shalt not be different.

In five chapters (or stories – as this book could be viewed not as a novel but a thematically linked collection of stories exploring the growth of a character over ten years), Witting charts the course of Isobel, an unloved child-cum-orphan, and her life in a world of books and words. It is, in its own way, the developing portrait of the writer as a young woman.

Recommended reading are:
Isobel on the Way to the Corner Shop
Faces and Voices (stories)

What else have I been reading?