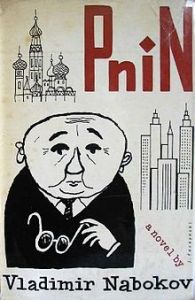 Nabokov began creating the eponymous character of this novella (or collection of loosely-linked stories), the Russian exile Timofey Pavlovich Pnin, assistant professor at the fictional Waindell College, as an antidote to the claustrophobic Humbert Humbert of Lolita. Despite Pnin’s bumbling, miscommunication and heartbreak, he is an endearing character, one for whom you cannot but feel somewhat overprotective of.

Nabokov’s prose is, as always, an absolute delight. His eye for detail, description and metaphor are virtually unparalleled. How can someone write so damned well in a language that is not their native tongue?

The 1954 Fall Term had begun. Again the marble neck of a homely Venus in the vestibule of Humanities Hall received the vermilion imprint, in apples lipstick, of a mimicked kiss. Again the Waindell Recorder discussed the Parking Problem. Again in the margins of library books earnest freshmen inscribed such helpful glosses as ‘Description of nature’, or ‘Irony’; and in a pretty edition of Mallarme’s poems an especially able scholiast had already underlined in violet ink the difficult word oiseaux and scrawled above it ‘birds’. Again autumn gales plastered dead leaves against one side of the latticed gallery leading from Humanities to Frieze Hall. Again, on serene afternoons, huge amber-brown Monarch butterflies flapped over asphalt and lawn as they lazily drifted south, their incompletely retracted black legs hanging rather low beneath their polka-dotted bodies.

And still the College freaked on. Hard-working graduates, with pregnant wives, still wrote dissertations on Dostoevsky and Simone de Beauvoir. Literary departments still laboured under the impression that Stendhal, Galsworthy, Dreiser, and Mann [and you can imagine that in a future posthumous edition that Nabokov would append his own name to this list] were great writers.

More of what I have read can be found under INFLUENCES.